When the bowel is blocked, food and liquid cannot pass through. Over time, food, liquid, and gas build up and cause pressure and pain. Some obstructions, when left untreated, can cut off the flow of blood to the intestine. This can lead to death of the intestine tissue and serious illness. 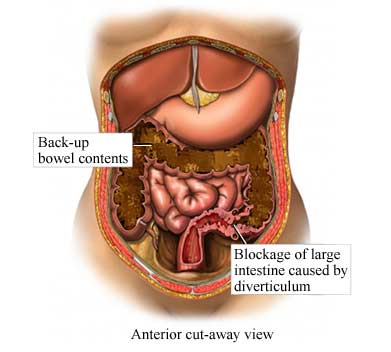 The bowel is a muscular tube that is constantly moving to push food through. Blockage may be caused by something blocking the inside of the tube or something that stops the intestine from working well.

Most small bowel blockages are due to scar tissue. This tissue connects the bowel to the abdominal wall or other organs. This makes it hard for the bowel to work as needed. Most large bowel obstructions are caused by tumors.

Other causes of bowel obstructions include:

Factors that may increase your chances o a bowel obstruction:

Symptoms of a bowel obstruction include:

You will be asked about your symptoms and medical history. A physical exam will be done. A stethoscope will be placed on your abdomen to listen for bowel sounds. Absent, or abnormal signs may suggest a bowel obstruction.

Images will be needed to confirm the obstruction. This can be done with one or more of the following:

Bowel obstructions can be serious and life-threatening. Treatment may require hospitalization to provide support:

The plan to remove the blockage will depend on where it is and what is causing it. Possible treatments include: