Skip to main content
OUR COVID-19 RESPONSE
Get important health information and updates on our enhanced safety protections.
Resource Hub

At St. Mark’s Hospital, our cardiologists in Salt Lake City, Utah are experienced at treating all types of heart arrhythmias.

For more information about heart arrhythmia treatments, or to schedule an appointment, please call (855) 413-7829.

Arrhythmias, sometimes referred to as heart palpitations, are abnormal beats of the heart. You may notice your heart beating too slowly (bradycardia), beating too fast (tachycardia) or beating irregularly (fibrillation). The abnormal heart rhythm is caused by specific heart cells triggering the irregular electrical impulses.

Types of arrhythmia are named for the area of the heart they affect, and include:

Ablation is a procedure that guides an energy source, like heat, to the inside of the heart using catheters. The heat is used to ablate, or remove, specific heart cells triggering the irregular electrical impulses.

Types of ablations and implantations for heart arrhythmia include:

Catheter ablation uses thin, flexible wires (electrode catheters) to find and destroy (ablate) the cells in your heart that are causing the problem. The catheter ablation process is as follows: 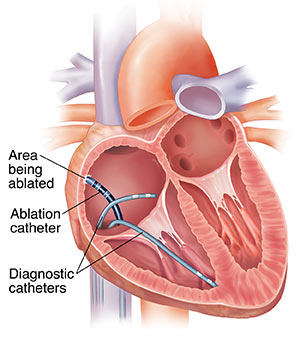 Catheter ablation typically takes two to four hours. You’ll be given medication to help you not feel the procedure. When the procedure is finished, the catheters are removed. Pressure is applied to the puncture sites to help them close. No stitches are needed. You’re then taken to a recovery room to rest. You'll need to remain lying down for a few hours and will be asked not to move the leg where the catheters were inserted for a few hours.

During the hybrid ablation procedure, the cardiac surgeon first performs a series of ablations on the outside of the heart through small incisions on each side of your chest. The ablations block the chaotic electrical signals, keeping them from disrupting the heart’s rhythm. The left atrial appendage is also removed to lower the patient’s stroke risk.

Three days later, the electrophysiologist utilizes heart mapping technology to identify more errant electrical signals on the inside of the heart and stops them with additional catheter ablations. This two-step process creates a scar that goes completely through the heart tissue, which more permanently blocks misfiring electrical signals.

The convergent ablation approach combines a surgical ablation of the back wall of the heart with internal ablation of the pulmonary veins. The cardiovascular surgeon and the cardiac electrophysiologist work as a team during one procedure to perform the ablations on a beating heart.

While similar to hybrid ablation, the convergent ablation procedure differs in two ways:

While convergent ablation is a new option in Utah and other states, it has been conducted approximately 2,000 times worldwide. Success rates for this combined approach are better than less invasive options.

Elective cardioversion is a procedure to restore your heart's normal rhythm from a fast or irregular rhythm in the top or bottom chambers of your heart.

You may have the procedure in a hospital or surgery center. It's often done on an outpatient (same day) basis. During the procedure, you are fully sedated. Then the doctor gives you a brief electric shock to help your heartbeat become normal again. In most cases, you can go home within hours of the procedure.

An implantable cardioverter (ICD) is a device placed permanently in your chest to monitor your heart rhythm. If your heart begins to beat too fast or too slowly, the ICD delivers electrical signals to correct the heart’s rhythm. The ICD is implanted during a surgical procedure that lasts one to three hours. The process is as follows:

You will likely stay overnight in the hospital after the procedure so medical staff can monitor your ICD. You’ll be given instructions on caring for the ICD incision area to avoid infection, and you may be told to not raise your arm for a period of time. Most patients experience bruising at the incision site that lasts for about a month.

A pacemaker is an implanted electronic device that assists your heart’s electrical system to beat at the right pace. The pacemaker implantation process is as follows:

In most cases, patients remain in the hospital for one to two days, so your pacemaker can be monitored. You’ll be given instructions on caring for the incision area to avoid infection, and you may be told to not raise your arm for a period of time.

For more information about heart arrhythmia treatments, or to schedule an appointment, please call (855) 413-7829.

Retrieving location data...
Use my location
Or Use My Location
List Map

For more information about heart arrhythmia treatments or to schedule an appointment, please call