Prostate cancer is a disease in which cancer cells grow in the prostate gland. The prostate is a walnut-sized gland in men. It surrounds the urethra, the tube that carries urine out of the body. The prostate makes a fluid that is part of semen. 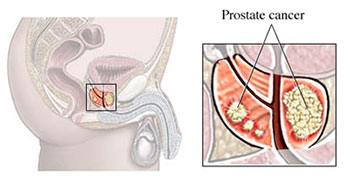 Cancer occurs when cells in the body divide without control or order. Normally, cells divide in a regulated manner. If cells keep dividing uncontrollably when new cells are not needed, a mass of tissue forms, called a growth or tumor. The term cancer refers to malignant growths. These growths can invade nearby tissues. Cancer that has invaded nearby tissues can then spread to other parts of the body.

It is not clear exactly what causes these problems in the cells, but it is probably a combination of genetics and environment.

Prostate cancer may cause:

These symptoms may be caused by other conditions, such as benign prostatic hyperplasia (BPH) or an infection. If you have any of these symptoms, promptly see your doctor.

Your doctor will ask about symptoms and medical history. A physical exam will also be done.

The physical exam combined with all of your test results, will help to determine the stage of cancer you have. Staging is used to guide your treatment plan. Like other cancers, prostate cancer is staged from I-IV. Stage I is a very localized cancer, while stage IV indicates a spread to other parts of the body.

Cancer treatment varies depending on the stage of prostate cancer. You and your doctor will discuss the best treatment options for you. Treatment may include:

This involves your doctor monitoring the cancer to see if it is growing. Watchful waiting may be appropriate if you:

Types of surgery that may be needed include:

Since prostate cancer surgery may cause side effects, like erectile dysfunction, urinary incontinence, and fecal incontinence, there may be other surgery techniques that may be a good option for you. Some examples include nerve-sparing surgery, robotic surgery, and laparoscopic surgery.

Radiation therapy involves the use of radiation to kill cancer cells and shrink tumors. Examples include:

Hormone therapy may include:

In some case, a type of surgery called orchiectomy may be needed. This involves removing the testicles, which stops androgens from being produced.

Other options may include:

To help reduce your chance of prostate cancer, take the following steps:

Please call (844) 208-9617 to schedule an appointment with a board-certified urology specialist.